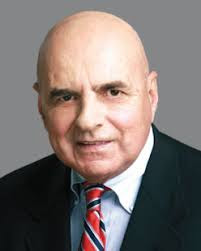 April 4, 2018 Press Releases
One of our giants left us yesterday and, while the Armenian Bar Association mourns his passing, we consider ourselves as doubly-blessed to have cherished California Supreme Court Justice Armand Arabian and, in turn, to have been cherished by him. He was one of a kind.
A founding member and staunch supporter of the Armenian Bar–literally traveling the world for 25 years to participate in and headline our programs–Justice Arabian’s contributions to humanity and to jurisprudence were so vast and exceptional that he is one of only a select few who has been conferred with the highest honor of the Armenian Bar Association, an Honorary Life Member. Born in New York City, the son of immigrant survivors of the darkest chapter of Armenian history, Justice Arabian remained a fierce advocate for the recognition of the Armenian Genocide and the quest for restorative justice for the Armenian people. His autobiographical masterpiece, From Gravel to Gavel, captures the triumph of the human spirit over the unimaginable atrocities that his family endured during the Genocide. At this time, we reflect upon Justice Arabian’s glorious legacy as a decorated United States Army paratrooper, his numerous landmark court decisions upholding the rights of women which led to the passage of reform legislation in all 50 states, his commitment to the advancement of the rule of law in Armenia, and his countless acts of benevolence with his wife, the late and beloved Nancy Arabian. Their compassion, their spirit of giving and serving, touched the lives of so many. For our members, we are truly fortunate and grateful to have had such an inspirational leader among us. While his loss leaves a great void, we take solace in knowing that he is resting with our Lord and find peace in the teachings of our Christian faith, which he shared, that the spirit of Justice Arabian will live on eternally.

Conversation with State Minister of The ...