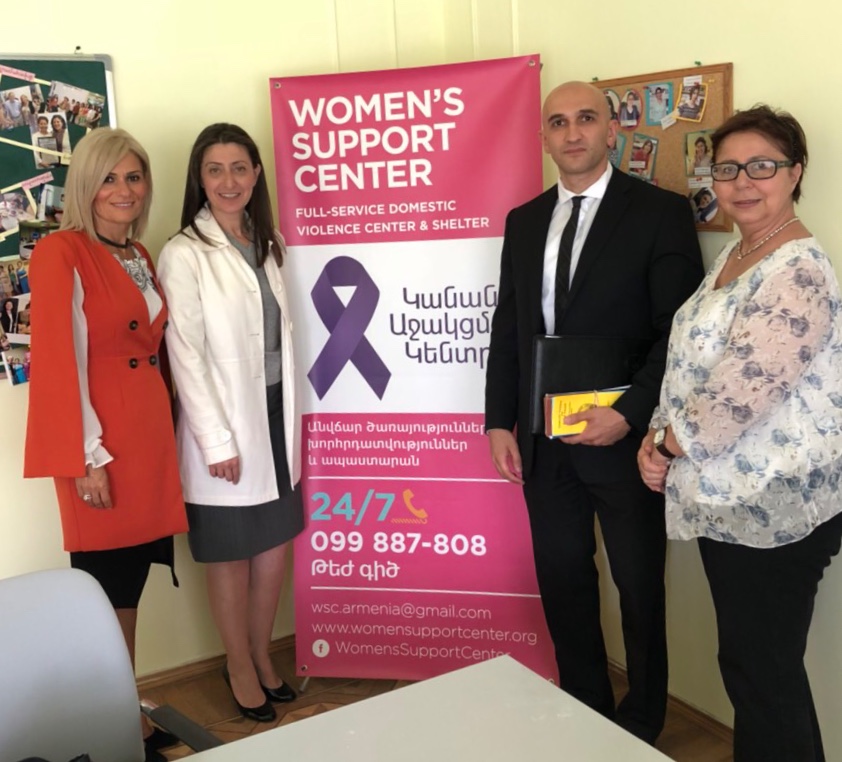 June 19, 2018 Press Releases
Both before and after the adoption of a new law in late 2017 on the prevention of domestic violence and the protection of the victims, the Armenian Bar Association has had years-long and deep-seated commitment to the realization of human and civil rights which, for too long, had been compromised in Armenia.  The Bar’s commitment extends to working with women’s groups which entails offering training opportunities for police officers, legal professionals and judges to implement the new law. In June, 2018, during its Annual Meeting in Artsakh and Armenia, the Armenian Bar collaborated with the Women’s Support Center in Armenia (WSC) and the Glendale Police Department to offer such training.  The City of Glendale sponsored Detective Vahe Abramyan, a ten-year veteran of the Glendale Police Department, who since 2011, has served the municipality as a peace officer in the Violent Crimes – Assaults Unit, where he investigates crimes against persons, internet crimes against children, and domestic violence. A key participant in the domestic violence training program, who offered an insightful and instructive judicial perspective, was Judge Amy Ashvanian of the California Superior Court, County of Los Angeles. Prior to her recent appointment to the bench, Judge  Ashvanian was a deputy district attorney in the Hard Core Gang Division of the Los Angeles County District Attorney’s Office, where she specialized in the prosecution of extremely violent, criminal street gangs. The new law on domestic violence did not come without its reported drawbacks.  The bill, entitled “Prevention of Domestic Violence, Protection of Domestic Violence Victims and Restoration of Solidarity in the Family” received immediate criticism because the law, instead of being a preventive and protective tool, is more a mechanism for something called “family reconciliation” between abusers and survivors.  Women’s rights organizations and domestic violence survivors, who have worked on the passage of the law since 2007, attributed the passage of the bill to the €11m grant made under the European Commission’s Human Rights Budget Support Program to the Armenian government conditioned on the adoption of a stand-alone law on domestic violence. Domestic violence remains a prevalent problem for Armenian society. “The Armenian Bar Association is committed to continuing its training efforts to bring true realization of the intent of the legislation and to providing real protections to the victims of domestic violence,” added Lucy Varpetian, Vice-Chair of the Armenian Bar Association. To learn more about the domestic violence programs in Armenia, please email us at [email protected].

Chicago Rises to Honor The Life ...