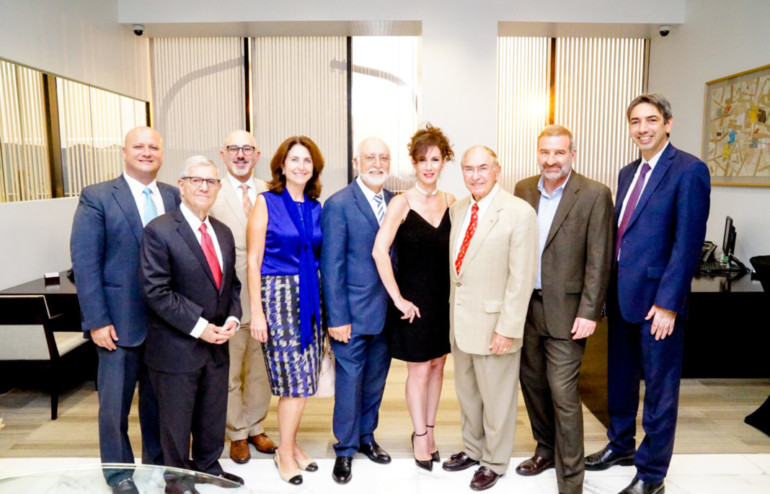 GLENDALE — The American University of Armenia (AUA) and the Armenian Bar Association joined forces to sponsor a new Technology and Innovation Legal Clinic at AUA’s campus in Yerevan through two receptions in California, led by David Balabanian, Esq.

The Golden State Bank in Glendale hosted the Los Angeles metro area gathering and the law offices of Morgan, Lewis & Bockius, LLP in San Francisco, with Balabanian as host, served as the engaging settings for legal professionals, AUA leadership and supporters who came together to learn more about the association’s partnership with Armenia’s leading university and its innovative projects for current and future students.

Balabanian, the first chairman of the Bar Association, welcomed guests and highlighted the significance of raising dialogue about the role of legal education in Armenia by creating stronger ties between the Diaspora and the homeland. Through his work with the group, Balabanian has brought continued awareness to critical legal issues in Armenia, which is now at a crossroads thanks to the Velvet Revolution and a newfound respect for the law.

“We are experiencing a new era in Armenia,” said Balabanian, who practices commercial litigation. “We hope to expect rule of law and as lawyers we have a special obligation to ensure the safeguarding of the legal system.”

Launching in Fall 2018, the Technology and Innovation Legal Clinic, whose operating costs will be sponsored by the Armenian Bar Association, will be made available to the student community through AUA’s Master of Laws (LL.M.) program.

The clinic, which Balabanian noted as a “valuable resource,” will be the first in Armenia to address the needs for professional legal counseling in rapidly growing fields, including technology, which is experiencing a 20-percent growth in Armenia. Selected AUA students will gain hands-on experience working and providing counseling to IT and engineering startups in relation to a wide range of legal issues, from company registration to contracting to intellectual property rights protection.