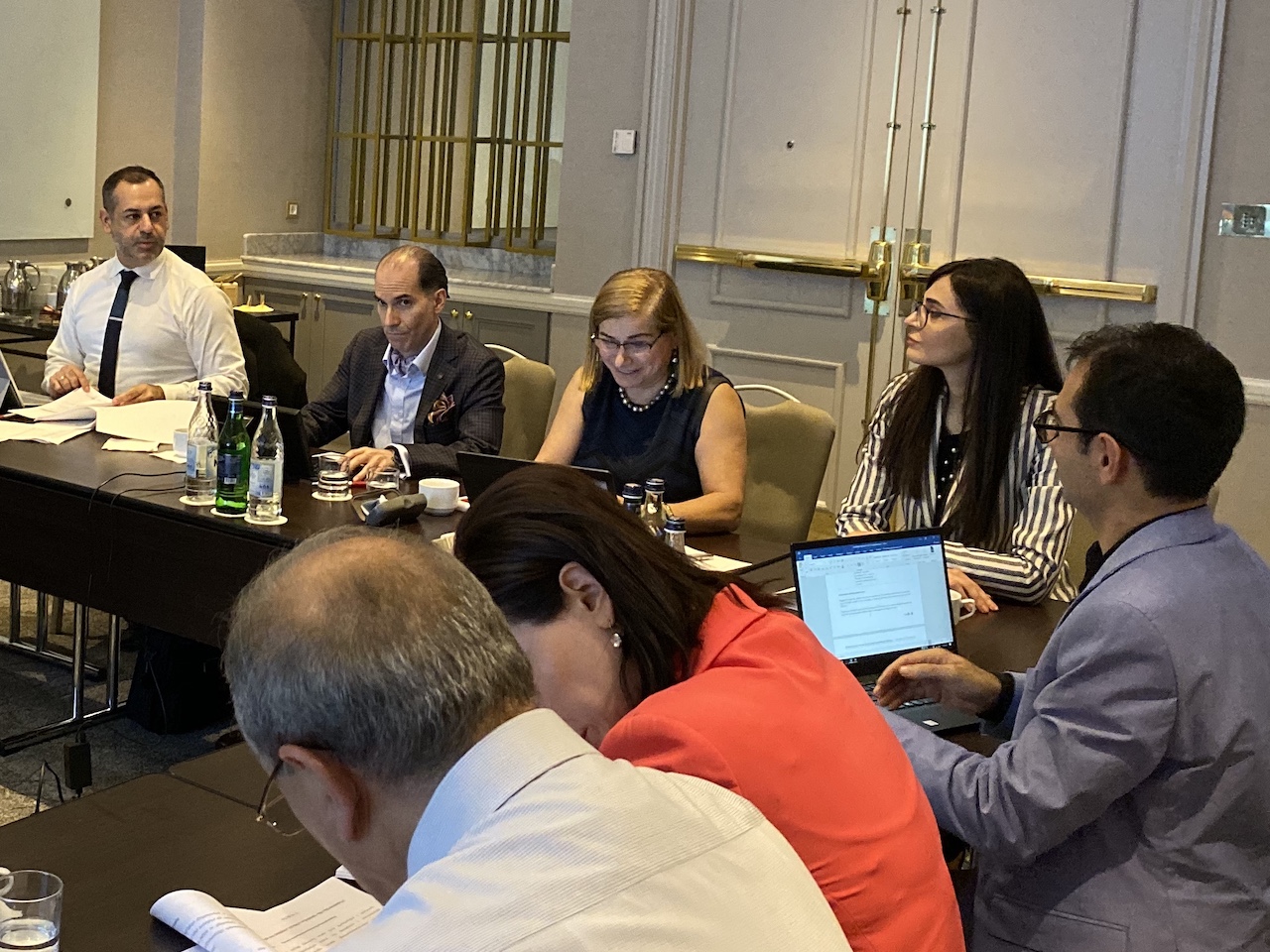 February 19, 2020 Press Releases
Editor’s Note: The Armenian Bar Association, in conjunction with Armenia’s Ministry of High-Tech Industry and Orion Worldwide Innovations, LLC, organized an IP & Corporate Law Summit that took place in Yerevan, Armenia, in October 2019.  The following is an article by ArmenBar member Ara Babaian recounting his experience participating in the Summit and in the WCIT2019 event, and visiting Armenia over the years, including the country’s recent rapid progress.  At the Summit, the Committee presented its expert conclusions and recommendations that included an analysis of IP protection and corporate  law issues in Armenia.  Armenian Bar members who participated in person in the Summit included the organizers of the Summit, Emma Arakelyan and Armen Morian, as well as Ara Babaian, Lana Akopyan, Karén Tonoyan, Narek Zohrabyan, Vartan Vartanyan and Ovsanna Takvoryan.  Other contributing ArmenBar members who joined the Summit remotely included Ray Aghaian, Mark Kachigian, Tamar Donikyan and Levon Golendukhin.  The Summit was attended by Hakob Arshakyan, Minister of High Tech Industry of Armenia; Gayane Serobyan, Advisor to the Minister; Ara Khzmalyan and Hasmik Movsesyan from Adwise Consulting Law Firm; Kristine Hambaryan, AIPA leader; and 80+ Parliament members and other government officials, business, tech representatives and educators. The New “Silicon Road”: Armenia’s Emergence as the Silicon Valley of Its Region By Ara Babaian, Esq. This article originally appeared in Asbarez Newspaper (available at asbarez.com) on January 24, 2020. For over two millennia, Armenia has served as the gateway between the East and the West along the Silk Road, which stretched from the Chinese Han Dynasty to the Roman Empire and included many countries in between.  In more recent years, various governments and corporations have made infrastructure investments into countries along the Silk Road that are increasing the flow of people and goods along this ancient route.  On the digital front, Armenia has become a hub between the East and the West through a technology ecosystem that has blossomed in the landlocked country.  Having translated eastern and western cultures for thousands of years, Armenia now has become the focal point of a new cultural exchange, this time through innovation.  Today, the Republic of Armenia has made technology a strategic area of focus, intending to make itself the Silicon Valley of the region or, as I like to call it, the “Silicon Road,” due to its proximity to other high-tech hubs in Russia, Belarus, Ukraine, Israel, and Iran. 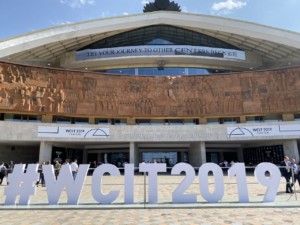 My First Trip to Armenia in the Dark Ages of the Early 1990s My first trip to Armenia was in the summer of 1993 when I was a pre-med student at UC Berkeley (prior to shifting my focus to the law).  That summer, I volunteered at the Yerevan Medical Center, a hospital in Armenia, while the Nagorno-Karabagh War between Armenia and Azerbaijan was in full gear.  Due to the war, the second floor of the hospital was filled with wounded soldiers.  I volunteered in the Pediatric Burn Ward on the first floor where children were dying weekly due to electricity-related accidents.  A vivid memory for me was the amputation of a 12-year old boy’s arms.  He had been trying to bring electricity to his home so that his family could have more light.  At that time, residents in the capital were rationed one hour of electricity per day.  Many had no running water.  The conditions were no different in the hospital, which sometimes had a mere trickle of water in the clinical faucets and electricity that could fail at any time.  Doctors and nurses who had not received their official pay for months worked on a barter system directly with patients (sometimes receiving something as simple and precious as a jar of preserved fruit from a villager). Life in Yerevan was bleak and sobering.  The winter before my arrival, the residents had chopped down all the trees for heating, so the city was barren during my hot summer there (not at all like the city’s current lush green state).  The streets were empty and desolate.  Other than NGO workers, there were very few visitors from other countries. Once the sun set, you had to walk the pocked sidewalks with an old-fashioned, pre-iPhone flashlight.  Electricity was a luxury.  I shaved by candlelight.  Corruption was rampant and so was crime.  I recall one occasion on which I was treated to dinner at the old Dvin Hotel, the only other table in the large dining room seemed to be “mafia.” But even in the dismal state that the population was in, Armenians were still hospitable to me and shared with me their love of art and culture.  I remember poignant productions of Armenian opera at the Yerevan Opera Theatre, with singers flanked by too-skinny dancers.  I recall art shows all over the city by painters aspiring to be the next Gorky or Sarian.  I came into contact with a kindred spirit at the Sergei Parajanov Museum – the term “avant garde” might have been coined for him.  Villagers gave me bowls of wild berries to welcome me.  Men and women took time out of their work (or time out of looking for work) to grill fresh-caught trout at Lake Sevan with me. 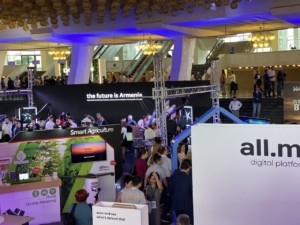 Today’s Optimism Following the 2018 Velvet Revolution In the intervening years between the early 1990s (after the collapse of the Soviet Union) to April and May 2018 (the two months of the Velvet Revolution), corruption was ever-present and toxic in Armenia.  According to the World Bank, in 1993, right after the collapse of the Soviet Union, Armenia’s population was 3.4 million and its gross domestic product was a mere $1.2 billion.  Although during this 30-year period the population fell to under 3 million, and its gross domestic product grew to $12.4 billion,Armenia’s growing wealth was not shared equally.  Armenia’s leaders collected billions of dollars from its citizens, built opulent homes, and drove exotic cars while the vast majority of citizens suffered.  However, in 2018, when Nikol Pashinyan led the peaceful Velvet Revolution and became the country’s new Prime Minister, things slowly started to change. October 2019: My Recent Visit and the Many Conferences In October 2019, I went to Yerevan, Armenia’s ancient-yet-modern capital, to participate in a number of technology and legal conferences – the World Congress on Information Technology (WCIT), the HIVE Ventures Tech Summit, and the IP & Corporate Law Summit sponsored by the Armenian Bar Association (a North American organization). During that time, Armenia was hosting even more global, regional, and local events.  A few of the events that were happening in Armenia during October included: Global Innovation Forum (regarding artificial intelligence), the Annual Eurasian Food Security Conference, the Teach for All Global Conference (preparing students to change the world), and Digitech 2019 (regional tech exhibit), among many others.  Earlier in the summer, there was also the Seaside Startup Summit held at Lake Sevan, Armenia. 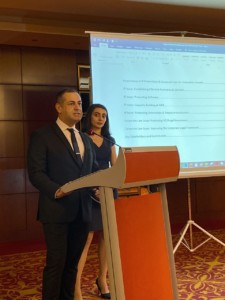 A Change Has Come This visit to Armenia, I could tell there was fantastic progress in the country the minute a young conference volunteer picked me up from Zvartnots International Airport with a driver.  She was an eloquent and beautiful recent graduate who spoke “Armenglish” to me.  Immediately, I could tell that English had replaced Russian as the dominant language for the locals, especially for the youth. It turned out that her bright spirit was prevalent throughout Yerevan, something I wasn’t accustomed to during the dark ages.  This time, I could feel the optimism and youth virtually everywhere I turned in the capital.  During the tech conferences, I saw college students volunteering and recent graduates contributing to the excitement in the air.  As a result of the various conferences, but also because of the native energy in the country, like-minded entrepreneurs and professionals were having both formal and chance meetings with each other to discuss groundbreaking technology startup and investment matters. Scenes from The Conferences As Armenians, we expend tremendous energy focusing on the past because of Turkey’s continued denial of the Genocide (despite its recent near-unanimous recognition by the U.S. House of Representatives and unanimous recognition by the U.S. Senate).  You can imagine how exhilarating it was for me to see a sign at a futurism exhibit at the WCIT that said, “the future is Armenia.”  My eyes filled with tears as I took that in, remembering my grandfather who survived the Genocide while looking at the future in front of me. At the HIVE Ventures Tech Summit (an initiative of the Hirair & Anna Hovnanian Foundation that invests in Armenian entrepreneurs), the tech leaders talked about “Hacking Silicon Valley.”  How do tech startups in Armenia access funding and other resources available in Silicon Valley?  How can they empower the latent talent and boost the potential of the country?  As Armenians have always valued a solid education for their children, it is no surprise that this landlocked Christian country has more engineers and PhDs per capita than you could imagine.  These individuals were coming to this conference to learn about how to harness this education and turn their knowledge into a business, creating a new economy for the region. Finally, at the Armenian Bar’s IP & Corporate Law Summit organized by the Ministry of High-Tech Industry and Orion Worldwide Innovations, LLC, on day one, we focused on finetuning the proposed changes that we were going to propose to the government regarding intellectual property and corporate laws – in other words, how to make the regulatory environment more friendly to both investors and inventors.  On day two, we presented our recommendations to members of Parliament and other officials.  I was honored to speak at this event about corporate law topics such as changing the law to allow Armenian companies to give stock options to employees, allow for the possibility of non-voting stock, and permit convertible securities. Some of the best meetings of my trip weren’t made at the conferences, but instead, chance connections made on the street as I bumped into people I knew or got to meet from the American East and West coasts, Europe, and Asia, and locally.  I felt that Armenia again was the center on the Silk Road between the East and the West. 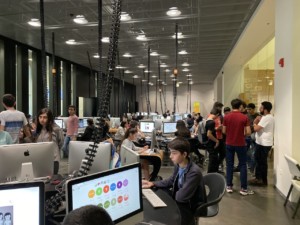 The Past and the Future There still are many serious issues that Armenia must address.  The country has large obstacles to deal with.  For example, in the IP & Corporate Law Summit, we explored the following areas to foster innovation and startup investment:   These are huge issues, but if the Velvet Revolution could happen in a span of two months, I am hopeful that Armenia will be able to tackle these challenges in the near future.  With a new focus on corporate and intellectual property law within the country, and with the support and involvement of Armenian professionals and businesspeople from the diaspora, I am confident changes will come fast.  With Armenia’s sharp focus on its youth, especially at groundbreaking organizations such as the TUMO Center for Creative Technologies and the Children of Armenia Fund, I am even more hopeful about the next generation of Armenians. This time around, Armenia did feel like a homeland for me (partly because sometimes I heard my native Western Armenian dialect being spoken by the Armenian refugees from Syria alongside the local Eastern Armenian dialect).  It felt like a place that had gone far and was going to go even farther in a short period of time.  We Armenians have century- and millennium-long memories, so our thoughts of the future can be similarly broad.  But I predict the positive changes will come into fruition much faster than that.  And I look forward to being part of the new Silicon Road.
Tags: IT Summit Silk Road WCIT World Congress on Information Technology