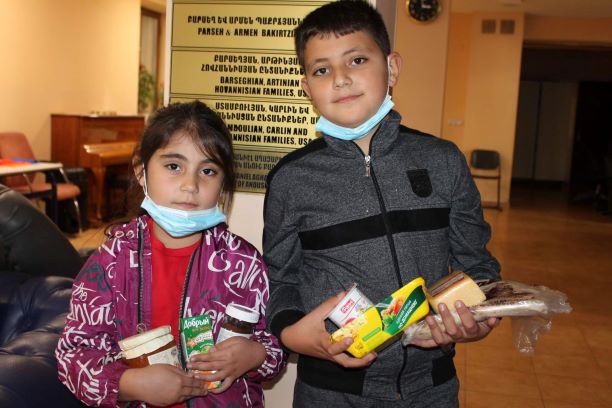 October 29, 2020 Artsakh
On October 5, 2020, Hasmik Grigoyan, a sixty-two year old woman, fled Stepanakert with her five grandchildren, leaving behind the rest of her family, including two sons, a daughter, and their spouses, as well as her own husband. She had not heard from them for the last two days. “Most of the time, they don’t call but when they message ‘haghtelu enk,’ [Armenian for we are going to win], I figure they are O.K” she says.  Her two sons and son in law are in the military, serving on the front lines. “Don’t ask anyone what their husband does, they are all fighters” she says.  She states she’s never seen anything like this, her house, which they built less than thirty years ago, is leveled to the ground.  Mrs. Hasmik symbolizes the strong love that the people of Nagorno-Karabakh have for their homeland. She states that within thirty minutes of the ceasefire, she will return home. Adding “although here, I am staying with my relatives, I was born in Nagorno-Karabakh and I am going to die on my land.” She was one of the few optimists in the group of women who had come to receive assistance from Orran. Orran, meaning “haven” in Armenian, is a humanitarian organization established and run by Armine Hovanissian and her husband Raffi Hovanisian. Many women and children, like Mrs. Hasmik and her grandchildren, sought refuge at Orran. Orran’s initial mission of supporting local at risk youth with food, shelter, and education, quickly expanded to include emergency assistance for the vulnerable displaced families fleeing their homes in Artsakh for safety in Yerevan. When Susanna, an Orran team member said “lokh lava linelu,”[‘all will be good’ in the dialect of Nagorno-Karabakh]. Mrs. Hasmik started crying, saying, “it is the first time that it is not the people of Nagorno-Karabakh, but the people of Armenia who are saying lokh lava linelu.” The children were running around happy and got happier when Orran’s staff asked them to choose among some toys. The boys grabbed the water guns and said this is how we are going to defend our homeland. As Mrs. Hasmik was ready to leave, she received a phone call that her husband’s nephew was just killed. Mrs. Hasmik was shattered. (photos are of two of Hasmik’s five grandchildren) 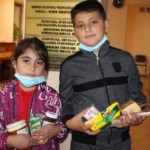 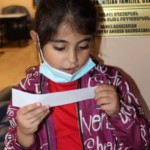 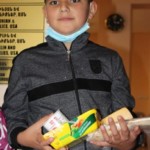 Three women were wounded from the ...