Aida M, a seventeen-year-old girl, is an 11th grader at Vitali Jhangiryan High School in Stepanakert, Artsakh. On the morning of September 27, 2020, at approximately 7:15 am, Aida was speaking to her father and the two were discussing sports as she was getting ready to begin her school assignments, when suddenly they heard the noise of bombing. The first hour of the bombing she was unable to contact or speak with her mother, as she had been in a gym during the attack. Once her mother returned, they went to the shelters seeking safety from the bombing. She felt safer there, although the electricity was inconsistent. The bombing in her neighborhood was constant. Her neighbor had been injured and was hospitalized. The windows and balconies of her family’s apartment were destroyed and the houses in front theirs had completely disappeared. She states “I can’t remember exactly how many times we heard sirens warning of bombs. It was very often.”  She never saw the full extent of damage to her hometown, as the next day her parents decided to send Aida and her siblings to Yerevan for safety.

Aida, along with her brother Aren (16) and her sister Sophia (19) are staying in a family home in the Yerevan while her parents remain in Stepanakert. Her sister, Sophia has been very frightened since she was sleeping when the bombing noise began and it terrified her. While in Yerevan Aida has been volunteering her time to help any way. Sadly, Aida’s grandfather had passed away a few days after the war began and her family arrived in Yerevan to organize his funeral, after which her parents went back home to Stepanakert. Aida is worried for her parents. Her father had been driving in their hometown when a bomb exploded nearby, and although they lost the family car, thankfully her father survived. When Aida speaks to her parents, they tell her that everything will be okay. Aida wants nothing more than to go back home, stating, “I miss my room, I miss my home, I miss my school, I miss my Artsakh.” Aida is ambitious and has many goals she wants to accomplish. She says, “my only dream is peace. But I also want to become a good lawyer and maybe I’ll be able to show the world the REAL JUSTICE and really protect human’s rights.” 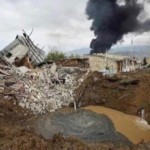 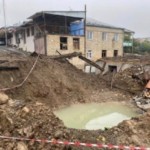 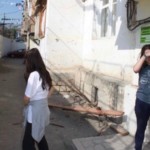