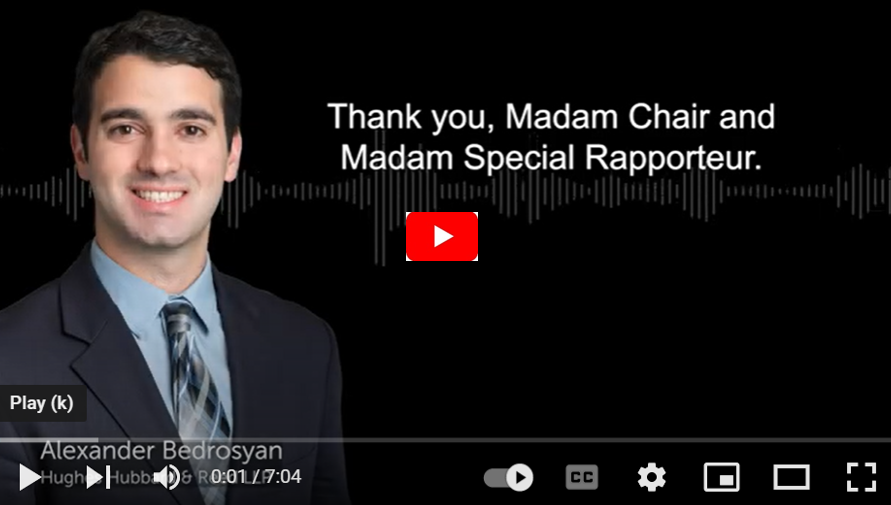 The Armenian Bar Association, with the support of fellow legal organizations in the Diaspora, prepared and filed five comprehensive reports with the United Nations Committee on the Elimination of Racial Discrimination (“U.N. Committee”) in connection with its periodic review of Azerbaijan. Armenian Bar representative Alexander Bedrosyan made two compelling presentations to the Geneva participants on August 8th and August 15th during which he clearly and persuasively explained Azerbaijan’s abysmal human rights record and its continuing current course of inflammatory conduct against ethnic Armenians.  The U.N. Committee is the body of independent experts that monitors implementation by state parties of the Convention on the Elimination of All Forms of Racial Discrimination. During the periodic review of Azerbaijan, the U.N. Committee examined various reports and addressed its concerns and recommendations to the state party (Azerbaijan) in the form of “concluding observations.”

In its concluding observations on August 30, 2022, the U.N. Committee found, among other findings, that in Azerbaijan there is “[i]ncitement to racial hatred and the propagation of racist stereotypes against persons of Armenian national or ethnic origin, including on the internet and social media, as well as by public figures and governmental officials, and the lack of detailed information on investigations, prosecutions, convictions and sanctions of such acts.” Furthermore, the U.N. Committee is “concerned about reports that school textbooks promote prejudice and incitement to racial hatred, particularly against ethnic Armenians, the marginalization of ethnic minorities in history education in the State party.”

These findings are consistent with and echo the positions advanced by the Armenian Bar in its written submissions to the U.N. Committee.  The strength and number of the Armenian Bar’s reports reflect the caliber and dedication of the organization and of its partner associations. These reports will be crucial assets for years to come in asserting and upholding the rights and security of Armenians and Artsakhtsis under international law and holding Azerbaijan accountable for its transgressions.

All of the reports submitted by to the U.N. Committee by the Armenian Bar and its partner organizations appear on the web page of the CERD session. The submissions and topic areas were as follows: 1. Arbitrary killings of civilians in Artsakh; 2. Hate speech towards Armenians in the diaspora; 3. Destruction of cultural heritage sites; 4. Prisoners of war; and 5. Inability to return to ancestral lands.