The  Armenian Law Students Association: Past and Present

[The Armenian Bar Association thanks Aleksan Giragosian for preparing this article.]

It’s the first day of my first semester of law school, and, of course, I’m going to be late to class.  I hop off the campus shuttle and weave through oncoming pedestrian traffic. I get caught behind a group of turtle people who walk in an impenetrable formation. To get around them, I hop across the street and narrowly miss an 18-year-old in a Mercedes. I get to the law school, identify my classroom, and use my t-shirt to dab the sweat off my face. I open the door slowly to avoid interrupting the lecture, which results in the door squeaking for 5 agonizing seconds. The entire classroom turns around, and the professor is visibly annoyed. I survey the room for an open seat, and spot the only one in the center of the first row. I take my walk of shame through the aisles, all while avoiding the professor’s gaze. I sit down, pull out my laptop, read the word “Torts” written on the board, and think to myself, “What the hell is a Tort?”

At this point, I’m wondering whether the tuition I just paid is refundable. Then I get an email from a guy named Armand Kizirian that reads:

To start off with, sorry if you’re not Armenian and are getting this email by mistake, I’m trying to guess based off of names! My name is Armand Kizirian, and I’m a 2L here at UCLA. I wanted to reach out to you guys at the start of 1L, basically to offer any help or advice I can in the challenging experience that is the first year of law school.

As you all probably know, 1L is not an easy year, but it doesn’t really have to be so bad… Some things you will have to figure out on your own (i.e. a study routine that works for you). Other things, you can ask me or other upperclassmen (most are very willing to help). For example, the differences between a casebook and treatise, what a law school final is like, when do you start outlining, what is outlining, Weyburn Terrace stuff, do we really start reviewing for the bar exam this Friday (no bar review is a social, you go to a bar!), etc. Feel free to ask…

P.S. For your Lawyering Skills memos, you will need to adhere to a very particular formatting. I used a template that never failed me in getting the right font, the correct number of lines per page, etc. Since the first writing assignment comes up in only a couple of weeks, I am attaching it to this email.”

Just moments before, I was contemplating dropping out. Then  Armand, a person I’ve never met, reached out to me and offered support, because we share an “ian.” It was very encouraging. Soon, other Armenian upperclassmen began offering advice, outlines, and beer.

What is the Armenian Law Student Association?

What is the Armenian Law Student Association?

Only a handful of ALSAs have an official logo. However, the logos that do exist vary widely.

Why do some law schools have ALSAs?

The first ALSA chapter was founded at Southwestern Law School in the 1985-1986 academic year. Former members recall organizing a student-led relief effort to assist the victims of the Spitak Earthquake in December 1988 and working closely with the  Armenian Bar Association at its founding in 1989.  Below is a yearbook photograph of Southwestern’s ALSA in 1990. 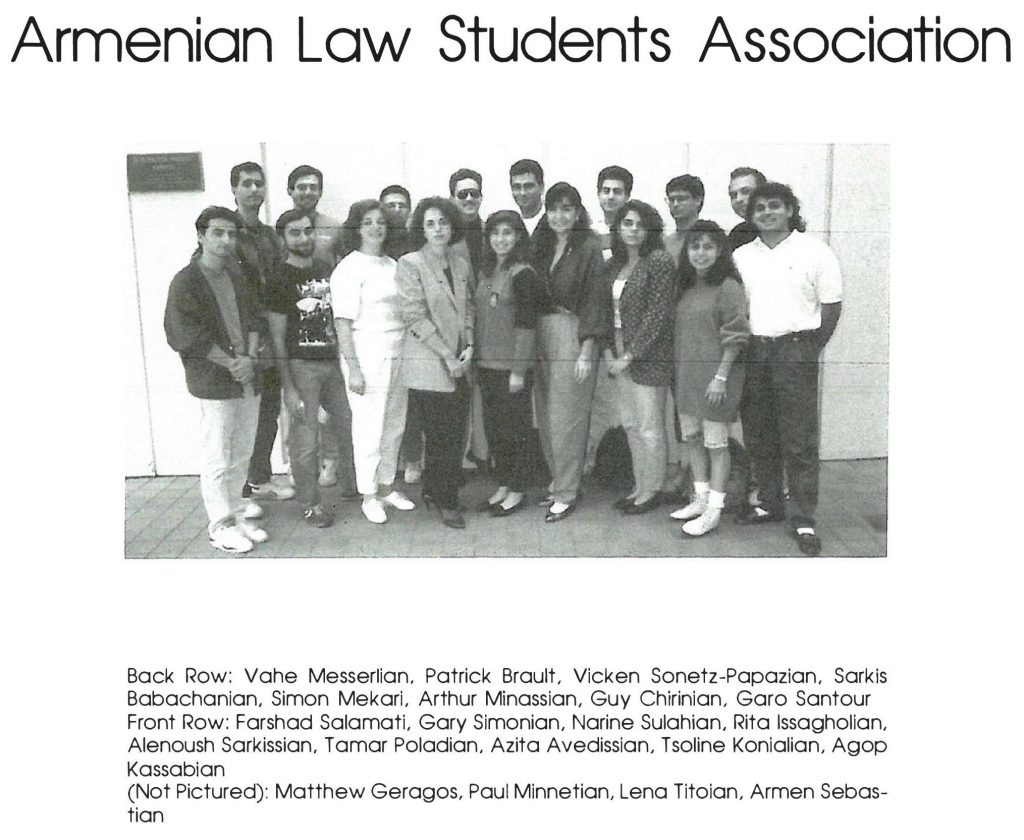 At its founding, ALSA was a loose association of Armenians that organized ad hoc events.  It wasn’t until the 1991-1992 academic year that Southwestern Law School’s ALSA, and the newly formed ALSA at Loyola Law School, elected a central leadership and held regular meetings. According to attorney John Balian, ALSA was a registered but inactive organization on Southwestern Law School’s campus when he was a first year.  He and some friends decided to restart the organization in the 1991-1992 academic year with the hope that Armenians can, “come together, help one another during tough times in our lives, and develop lifelong relationships. The friendships I developed there 20+ years ago are still going strong.”

The organization has since spread to 11 law school campuses throughout California.  The newest ALSA chapter was founded in the 2015-2016 academic year at the UC Berkeley School of Law. Nare G. Aleksanyan, a second year and one of the founders of Berkeley’s ALSA, notes: “Although few in number, Armenians have been a part of the student body at Boalt for many years. It was time to establish an official ALSA to attract more Armenians to Berkeley Law.”

Regardless, there is no single reason why Armenian students decided to establish an ALSA on their respective campuses. Other reasons given by students for starting an ALSA include:

3) creating opportunities for students of Armenian heritage or students interested in Armenian culture to network with like-minded students;

5) increasing awareness about Armenian issues among the law school community

6) working closely with the Armenian Bar Association and developing ties to Armenian professionals in the legal field; and

The ALSAs of each campus reported organizing similar events, like inter-chapter mixers, Armenian food fundraisers, and panels of lawyers and judges.  Some organized particularly remarkable events.  For example, the Southwestern ALSA of the early 1990s would organize a skiing trip to Big Bear. Another example is UC Hastings’ ALSA, which would organize a special dinner with retired California Supreme Court Justice Marvin Baxter in his private chambers. Nevertheless, every ALSA, regardless of size, past and present,  reported organizing some event in commemoration of the Armenian Genocide.

Why don’t some law schools have ALSAs?

William Saroyan, the Armenian-American author, said of the Armenian people: “For when two of them meet anywhere in the world, see if they will not create a new Armenia.”  He’s right! Diasporan Armenians tend to seek each other out, whether they’re in the same city or on the same campus.  Once they find each other, they almost invariably begin organizing themselves into a community, Saroyan’s “new Armenia.” However, he was wrong about the number; apparently it takes at least 6 Armenians, not 2.

No law school has started an ALSA with less than 6 members.  According to the interviewees from the law schools without ALSAs, the primary reason they haven’t started an ALSA is the paucity of Armenian students.  Alek Kargorodian, a second year at Santa Clara Law School, says, “All of us Armenians would enjoy being more unified with a club, but a club with just 5 members doesn’t seem worth it…It’s a great thing being around people of your same culture, but it’s so hard to find others who are Armenian that it turns people off from starting a club.”

Numbers aren’t the only factor preventing Armenians from founding ALSAs. Interviewees noted that on some campuses Armenians tend to join other student groups that appeal to their ethnic identity, but have a broader focus, like the International Law Society or Middle Eastern Student Association.  Others painfully conceded that the Armenian students on their campus show no interest in getting to know one another.

How many Armenians currently attend the 21 ABA-accredited law schools in California?

However, the size of each school’s ALSA varies independently of the number of Armenians. Loyola Law School has approximately 40 Armenians, but it has 120 registered ALSA members. In comparison, UCLA School of Law, with 14 Armenian students, only has 14 registered ALSA members. The difference is attributable to the degree to which some ALSAs are willing to recruit non-Armenian members.  Laurie Tomassian, a second-year student at USC Law School, believes expanding ALSA’s membership base to include non-Armenians benefits the organization. She argues, “Our community has a lot to offer – we hold a strong presence in Los Angeles both in terms of our numbers and our successes. It’s important for us to open the door of our culture to non-Armenians so that they too may witness and benefit from the great work Armenian lawyers do every day.”

Conversations with the different ALSA chapter leaders revealed a pattern of common organizational shortcomings, including a lack of cooperation across campuses, limited support and guidance from the Armenian Bar Association, and problems transitioning from year to year. Regardless, California’s 11 ALSAs continue to thrive.  Their numbers have increased, their activities have diversified, and they’re more integrated into the fabric of their respective law school communities.  Most importantly, they continue to offer support to those 1-Ls who show up to their first day of class late, sweaty, and pondering the meaning of a Tort.

[1] There were schools for which I couldn’t find any Armenians, but I didn’t want to list them because they may have more than 1 and I just haven’t found them.