ZUCKERMAN V. THE METROPOLITAN MUSEUM OF ART, THE SUPREME COURT OF THE UNITED STATES (2020) 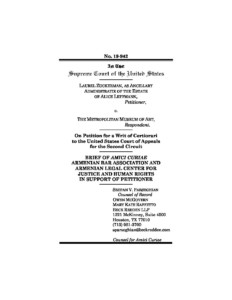 ZUCKERMAN V. THE METROPOLITAN MUSEUM OF ART, THE SUPREME COURT OF THE UNITED STATES (2020)

Seepan V. Parseghian of the Beck/Redden law firm based in Houston, Texas, as counsel of record for the Armenian Bar Association, filed an amicus brief with the U.S. Supreme Court in connection with Zuckerman v. The Metropolitan Museum of Art.  Joining the Armenian Bar as amici was the Armenian Legal Center for Justice and Human Rights.  The amici curiae brief was filed in support of a Petition for Writ of Certiorari related to the rightful ownership of the prized Pablo Picasso painting, The Actor, currently valued at more than $100 million. Considered one of Picasso’s masterpieces, the painting was owned by the Leffmann family in the late 1930’s, when the owners sold it under apparent duress for a mere $12,000 in order to escape persecution in Nazi Germany on account of their Jewish heritage. Since 1952, the painting has been on display in The Metropolitan Museum of Art in New York.

Laurel Zuckerman, the great-grandniece of the Leffmanns acting as administratix of their estate, sued The Met to recover possession of the iconic painting under the 2016 HEAR Act (the Holocaust Expropriated Art Recovery Act), but the Second Circuit Court of Appeals dismissed the lawsuit on laches grounds even though the case had been filed within the HEAR Act’s prescribed statute of limitations. On behalf of the Armenian Bar and the Armenian Legal Center and in support of Ms. Zuckerman’s Writ Petition, Mr. Parseghian urged the Supreme Court to grant review, advocating that the Second Circuit’s ruling violated the plain language and clear meaning of the HEAR Act and, just as importantly, complicated and impeded the efforts of other genocide victims–particularly descendants of Armenian Genocide victims–to recover lost and stolen art and other property. Mr. Parseghian further explained that the propriety of the Second Circuit’s ruling is an issue of nationwide importance, impacting the ability of victims of not only the Holocaust, but also the Armenian Genocide and other atrocities, to seek legal recourse towards achieving restorative justice.
A copy of the brief may be found by clicking on the file.