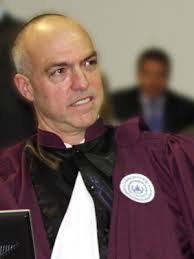 A talk with Nicholas Koumjian on the subtle issues of the definition of genocide and what distinguishes genocide from other crimes against humanity, such as exterminations.

The Convention on the Prevention and Punishment of the Crime of Genocide, adopted by the United Nations General Assembly on 9 December 1948, obligates the state signatories to prevent and punish genocide. Since the convention was adopted the International Criminal Tribunals for Rwanda and the Former Yugoslavia have returned genocide convictions, the ICC has issued an arrest warrant against Sudan’s president for charges that include genocide and the trial chamber for the Extraordinary Chambers in the Courts of Cambodia is currently deliberating on charges against the top surviving leaders of the regime which include genocide against the Vietnamese and the Cham Muslim minorities. However, the vast majority who lost their lives under that regime was ethnic Khmer and these killings are not covered by the genocide charges. Various voices have called on the international community to recognize the conflict in Syria to include an ongoing genocide against Yazidi and Christian minorities. What are the elements of genocide and what distinguishes genocide from other crimes against humanity, such as exterminations? Does it matter whether crimes are labelled genocide or given a different legal characterization?

Nicholas Koumjian has worked at various international criminal tribunals for the past 17 years, including the International Criminal Court, International Court for the Former Yugoslavia, Special Panels for Serious Crimes in East Timor, State Court of Bosnia and Herzegovina, and Special Court for Sierra Leone. Following his appointment by the United Nations Secretary General, he has served in Cambodia as the International Co-Prosecutor at the Khmer Rouge Tribunal. He recently completed final arguments in the trial of Nuon Chea, “Brother Number 2” in the Khmer Rouge and Khieu Samphan, the former Head of State on charges for crimes committed by that regime. It is estimated that almost 2 million people lost their lives during that regime and the charges include genocide, enslavement, forced marriage and rape. From 2007-2012, Mr. Koumjian was Senior Trial Attorney for the prosecution of Charles Taylor, former President of Liberia for crimes in Sierra Leone and led the prosecution in the trial at the ICTY of Milomir Stakic, Mayor of Prijedor, on charges which included genocide. Prior to international practice, Mr. Koumjian was a Deputy District Attorney in Los Angeles for nearly 20 years.

This activity has been approved for 1.15 hours of MCLE Elimination of Bias credit by the State Bar of California.