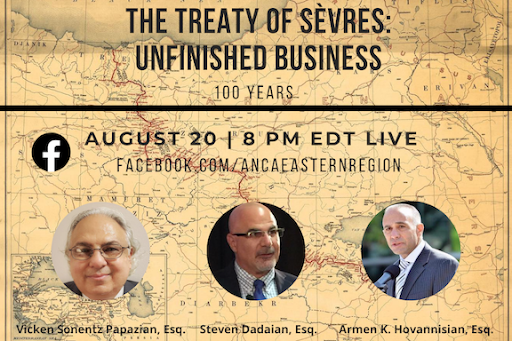 Papazian, who will serve as the moderator, is an attorney in private practice, licensed in the State of California and the District of Columbia. Past Executive Director of the Armenian National Committee of America and past Chairman of the Board of Directors for the Armenian National Committee Western Region, he is a graduate of Bates College and Southwestern University of Law. Papazian studied international law at the University of Florence and has been active in the pursuit of the Armenian Case since the 1980s.

Dadaian, a trial attorney with almost 30 years of experience in government law and high exposure litigation, has spent the majority of his career as a trial lawyer and manager of a large litigation office responsible for defending the State of California in high value liability exposure.

He is admitted to practice before the United States Supreme Court to which the Armenian Bar has petitioned as amicus curiae with respect to genocide-related recovery efforts. Before his 20-year tenure at CHUBB, he held the post of Vice President, Environmental Claims for Markel West, directing its legal department and focusing on the resolution of complex environmental and product liability exposures. He also worked at the Los Angeles office of the New York-based law firm of Chadbourne & Parke LLP, where he received the firm-wide pro bono award for his representation of indigent clients, many of whom were Armenian immigrants who had just immigrated to the U.S. and were experiencing challenges. Hovannisian’s professional and academic works have appeared in various publications including The Environmental Claims Journal and The Armenian Review.

“Understanding the Treaty of Sèvres is an indispensable part of understanding modern Armenian history, the legal issues addressed as well as the unique circumstances that gave rise to its formation. The Treaty of Sèvres continues to play an integral role in the pursuit of the Armenian Case today,” said Vicken Sonentz Papazian, Esq.

August 10, 2020, marked 100 years since the signing of the Treaty of Sèvres, an international treaty signed by both Turkey and the Republic of Armenia in 1920. The Treaty recognizes that Turkey is responsible for its war crimes and demands that Turkey take steps to facilitate the process of punishing those directly involved in the crime.

The Treaty also demands that Turkey repeal the 1915 Abandoned Property laws and the supplementary provisions thereof, compelling it to return all confiscated properties to individual or community owners. Finally, the Treaty of Sèvres provides a legal basis for the arbitration appeal to US President Woodrow Wilson to determine the Armenia-Turkey border.

For the past 100 years, Turkey has continued to deny its crime against humanity – the Armenian Genocide – exhibiting aggression toward the Armenian nation.