Every April, contemporaneously with the commemoration of the Armenian genocide, we gather to celebrate the public service of our professional colleagues—lawyers, judges, law enforcement officers and other government workers, and the sacrifices and endeavors of those who have devoted their lives to public service. It is not a coincidence that we come together during the week when the world remembers the Armenian Genocide. Just over 100 years ago, Armenians saw the destruction of institutions that were built to protect the public, and experienced firsthand public executions conducted by those charged with public protection. They saw how societies could be plunged into darkness, bringing out the worst in humanity and pushing an ancient nation – and with it thousands of years of civilization and culture – to near total destruction. For Armenians, these events are not distant historical memories; they are the living reality embedded into Armenians’ psyche that will never be forgotten. As survivors restored their lives, communities and churches in the Armenian diaspora spread throughout the globe, Armenians, from generation to generation, steadfastly supported strengthening and maintaining our independent governmental institutions to act as a modern day firewall against tyranny and authoritarianism. 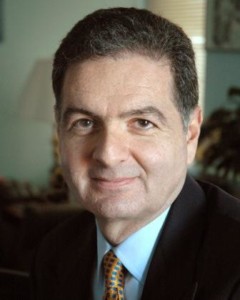 Robert H. Tembeckjian has been Administrator and Counsel to the New York State Commission on Judicial Conduct since 2003 and has been on the Commission’s staff since 1976. He received an AB from Syracuse University, a JD from the Fordham University School of Law, and an MPA from Harvard University’s Kennedy School of Government.

Mr. Tembeckjian was a Fulbright Scholar to Armenia in 1994, teaching constitutional law and ethics at the American University of Armenia and Yerevan State University. He also advised Parliament on its adoption of a new constitution after Armenia’s independence from the Soviet Union.

Mr. Tembeckjian served as an advisor to the American Bar Association when it rewrote the Model Code of Judicial Conduct from 2003 to 2007. He has also served on the editorial board of the Justice System Journal, a publication of the National Center for State Courts; on various ethics committees of the New York State and New York City Bar Associations; and on the boards of the Armenian General Benevolent Union of America, the Association of Judicial Disciplinary Counsel, the Westwood Mutual Funds, the United Nations International School, and the Civic Education Project. He has also written numerous essays on judicial ethics for various news and professional publications.

END_OF_DOCUMENT_TOKEN_TO_BE_REPLACED

Hon. Robert Morgenthau is the former New York County District Attorney (1975-2009) and is the longest serving incumbent of that position. In his nine terms in office, his staff conducted about 3.5 million criminal prosecutions. During that period, homicides in Manhattan were reduced by over 90%. Mr. Morgenthau vigorously prosecuted white-collar criminals as well, becoming the nation’s leading proponent of the enforcement of state law to combat “crime in the suites.” Prior to that, Mr. Morgenthau was the United States Attorney for the Southern District of New York, from 1961, when he accepted President Kennedy’s appointment, until 1970. He attended Yale Law School and has a distinguished career in the Navy where he served during World War II.

Throughout several generations, the Morgenthau family has fought, at times at the risk of their own safety, for basic human rights and the cherished principles of humanity. His father, Henry Morgenthau Jr., was the United States Secretary of Treasury during the Jewish Holocaust and fought tirelessly to save Jews from the horrors of the Holocaust. His grandfather, Henry Morgenthau Sr., was the United States Ambassador to the Ottoman Empire during the Armenian Genocide and worked tirelessly to save Armenians from the horrors of the Genocide, raising the voice of humanity to let the world know that “[a] campaign of race extermination is in progress.”

Robert Morgenthau’s voice regarding the historical truth and call for justice has continued throughout his life and it rings as true and loud today as ever, for this and future generations to follow.

Claire C. Cecchi serves as a United States District Judge for the District of New Jersey in Newark, New Jersey. She joined the Court as a United States Magistrate Judge in 2006, a position she held until her appointment in 2011. She has a substantial caseload of civil and criminal matters and is a designated judge in the patent pilot program, handling numerous high-profile patent cases. She is also actively managing a sizable multi-district litigation involving personal-injury claims arising from the use of proton-pump inhibitors.

Following her graduation from law school, Judge Cecchi served as an Assistant Corporation Counsel in the Office of the Corporation Counsel, City of New York. Thereafter, she was an Associate at Robinson, St. John & Wayne from 1992 to 1996 and its successor firm, Robinson, Lapidus & Livelli in 1996. Subsequently, at the firm of Carpenter, Bennett & Morrissey she was an Associate from 1997 to 2001 and a Partner from 2001 to 2004. The firm later merged and became known as McElroy, Deutsch, Mulvaney & Carpenter, where she was also a Partner. She specialized in complex litigation in federal and state courts of New Jersey and other jurisdictions.

The New Jersey Law Journal named Judge Cecchi one of New Jersey’s “40 Under 40” in 2002. Among her other honors, she received the Fordham Law Alumni Association’s Distinguished Alumnus Award in 2016. She is a Fellow of the American Bar Foundation, a Member of the Historical Society of the United States District Court for the District of New Jersey, and a Master of the William J. Brennan, Jr./Arthur T. Vanderbilt American Inn of Court.

Karalunas teaches New York Civil Practice at Syracuse University College of Law. She is Editor of the Judicial Dispatch and author of a chapter in the treatise Commercial Litigation in New York State Courts. Karalunas also speaks frequently on many substantive law and trial practice topics. Justice Karalunas was the 2009 recipient of the Syracuse University College of Law Distinguished Alumni Achievement Award, and the 2017 recipient of the Central New York Women’s Bar Association’s inaugural Karen DeCrow Award.

Richard S. Hartunian is a partner at Manatt, Phelps & Phillips, LLP, having joined the firm in August, 2017 after a 20-year career with the Department of Justice. In 2010, after almost 13 years as an Assistant United States Attorney (AUSA), where he prosecuted narcotics, violent crime and gang related cases, Rick was appointed and confirmed as the United States Attorney for the Northern District of New York (NDNY). In that role, he led an office of 45 AUSAs and 100 employees (with a $10 million budget) during times of fiscal challenge and significant staff changes. Notably, Rick reorganized the NDNY’s Civil Division to provide it with the resources and expertise to conduct affirmative civil enforcement investigations, including investigations into corporate fraud and wrongdoing.

During Rick’s tenure as U.S. Attorney, the Civil Division grew from four to ten AUSAs, with three dedicated prosecutors focusing on affirmative civil enforcement cases and routinely conducting investigations into government contracting, health care, and environmental fraud. Throughout his entire DOJ career, Rick worked closely with all federal investigative agencies and their task forces, in addition with many state and local law enforcement and administrative agencies.

During his term as U.S. Attorney, Rick was appointed and served for four years on the Attorney General’s Advisory Committee (the AGAC), providing counsel to Attorneys General Eric Holder and Loretta Lynch. As a member, Vice Chair and Chair of the AGAC, Rick provided input on notable DOJ initiatives, such as the Individual Accountability policy in cases involving cooperation by corporations, the Civil Enforcement Cooperation policy, various DOJ discovery initiatives, and the Department’s response to the opioid crisis. On two occasions, Rick was asked to testify before Congress on behalf of the Department: on the challenges surrounding synthetic drug prosecutions, and on northern border security, an issue that Rick developed significant expertise in through his important work with U.S. and Canadian border security agencies and prosecutors.

In his new role as a Partner at Manatt, Rick defends companies against allegations of white collar crime, healthcare fraud and environmental violations, and advises on cross-border security and trade issues, as well as cyber-security and defense procurement matters. He also helps clients manage crises that result from litigation and government enforcement efforts, particularly when investigations involve multiple agencies and jurisdictions.