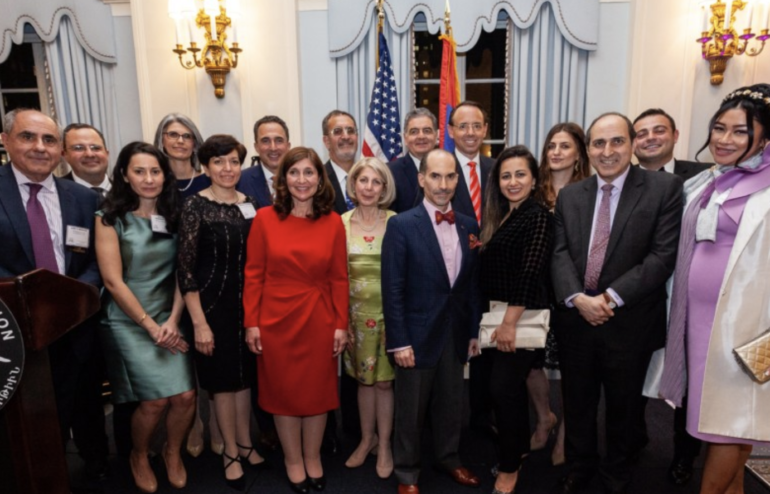 New York—The Armenian Bar Association’s New York/New Jersey/Connecticut Chapter hosted its annual Public Servants Dinner at the Yale Club in midtown Manhattan on April 25, 2019, where it conferred its coveted Public Servant Award on two prominent public servants: Robert H. Tembeckjian, the Administrator & Counsel to the New York State Commission on Judicial Conduct, and Rod J. Rosenstein, the Deputy Attorney General of the United States Department of Justice. The event, which was sold out well in advance, was attended by prominent members of the practicing Bar, over 70 judges of the appellate and trial courts, over 20 present and former federal and state prosecutors, and more than 25 other public servants at the international, national, state and local levels, including numerous bar association presidents.

“The Armenian Bar Association is committed to promoting public service, recognizing those who devote their professional lives to serving the public and embody the best qualities for such noble endeavor. Tonight, we acknowledge the distinguished lifetime achievements of two of our own, Robert H. Tembeckjian and Rod J. Rosenstein, as Public Servants of the Year for 2019. With the amazing co-chairs and committee members we look forward to carrying on this grand tradition in the years ahead,” said organizing committee co-chair Souren A. Israelyan.

The Public Servant Award was first conferred on Robert H. Tembeckjian, who has been a devoted public servant working at the New York State Commission on Judicial Conduct since 1976, and since 2003 has been serving as the Commission’s Administrator & Counsel. With a Master of Public Administration from Harvard’s Kennedy School of Government, Mr. Tembeckjian was a Fulbright Scholar who went to Armenia in 1994. There, he taught constitutional law and ethics at the American University of Armenia and Yerevan State University. Both honorees of the evening delivered substantive, timely and groundbreaking speeches.

Mr. Tembeckjian called attention to the need of our country’s leadership to show compassion and empathy to the plight of refugees and immigrants, as he recalled how his grandparents, survivors of the Armenian Genocide, arrived in America as undocumented aliens. He described the circumstances by which his grandmother eventually was allowed to remain in the United States and become a United States citizen: “. . . my illegal immigrant grandmother was reprieved by a government that understood it could both uphold the law and postpone its consequences for humanitarian reasons; a government that took time to examine and differentiate among the many who sought its refuge, that did not invoke scripture to promote exclusion at the expense of decency or justice.” (Full speech here.)

Mr. Rosenstein’s speech, which was covered by major news organizations, including CNN, the Washington Post, New York Times, the Los Angeles Times, and the Wall Street Journal, were his first public comments on the Mueller Report since it was published just days earlier. Mr. Rosenstein explained in detail his role and that of the Justice Department during the Mueller investigation. He stressed: “As acting Attorney General, it was my responsibility to make sure that the Department of Justice would do what the American people pay us to do: conduct an independent investigation; complete it expeditiously; hold perpetrators accountable if warranted; and work with partner agencies to counter foreign agents and deter crimes.” He emphasized that the Department of Justice “. . . stands for the principle that every American deserves the protection of the rule of law.” (Full speech here.)

Lisa Barsoomian, the wife of Deputy Attorney General Rosenstein and a past executive committee board member of the Armenian Bar Association, was also in attendance. Mr. Rosenstein delighted the audience as he recounted his life as an ABC – Armenian By Choice – and described his trip to Armenia in 1994 with the Armenian Bar Association, where he presented lectures to law students at Yerevan State University.

Read their remarks at the links in the captions below: