In prior weeks, the Armenian Rights Watch Committee repeatedly called on lady justice to rise and reproach the craven animals owned and operated by Turkey’s President Erdogan for their May 16, 2017 bloodthirsty savagery on U.S. soil against law-abiding protesters in Washington D.C.

While we have not been alone in our demands for the responsible parties to be brought to justice (others demanded too), it is gratifying for us—a bar association comprised of lawyers, prosecutors, judges, academicians and law students—to see our call heeded and decisive action finally taken, as prosecutors filed charges yesterday against at least 14 members of Turkish President Erdogan’s security detail.

The accusations against each of those charged stem from their respective roles in last month’s brutal beatings of peaceful demonstrators protesting Erdogan’s policies during his visit to the U.S. capitol. The charges brought against these bestial assailants include felony assault allegations. To date, and pursuant to D.C. Superior Court arrest warrants, two additional individuals have now been apprehended.

We now call upon prosecutors to invoke relevant and codified exceptions to diplomatic immunities and to commence extradition proceedings against the Turkish fugitives. We further urge prosecutors to forego dismissal of any underlying charges through plea negotiations. In the event that any of those responsible for the carnage opt to accept responsibility for their crimes by pleading guilty, we demand that their guilty pleas to be as to all charges levied against them and that such pleas be accompanied with admissions of any aggravating allegations and enhancements.

We are pleased that our voices of discontent were heard—particularly in the face of the White House’s meager lamentations about what was openly witnessed worldwide as a brutal onslaught carried out by the head of a foreign government’s security detail against U.S. citizens. We look forward to and await the day when commensurate justice will be meted out to those who are found culpable in our courts of law, fairly and equitably—much unlike, of course, courtrooms in Turkey.

To be clear, we shall continue to be vigilant to ensure that law and order are, as they surely must be, restored. Turkey’s importing of insidious anarchy and rabid bellicosity is not welcome in this country. When “guests” on American soil violate and blatantly disregard our laws—in vile and violent ways—we must not cede an inch of our most cherished and protected freedoms of speech, association and peaceful assembly.

Let no one doubt our American–Armenian brand of fierce resolve. We vow to remain engaged, and we will vigilantly follow the progress of these arrests and charges to their just conclusion. To be sure, our engagement and monitoring of these developments will be unwavering every step of the way. It will be—as all things we commit to—fierce. And, on this matter, more so than ever before, we will be at our fiercest. 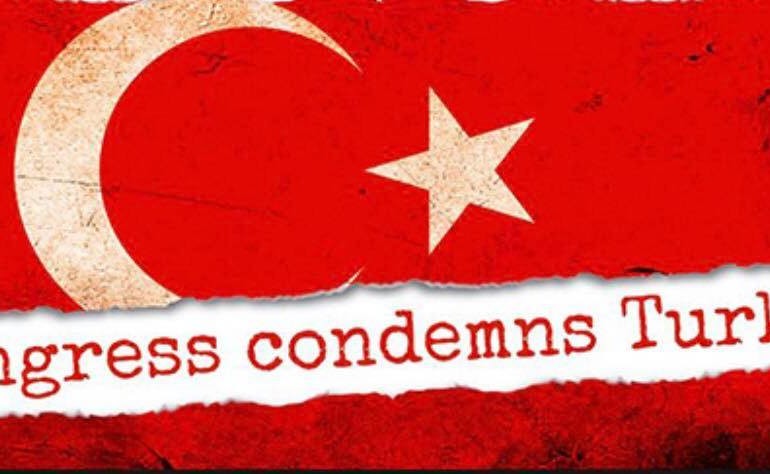 The Armenian Rights Watch Committee (ARWC) of the ARMENIAN BAR ASSOCIATION welcomes today’s unanimous resolution of the US House of Representatives (USHR) condemning the violence by the Turkish president’s bodyguards, which took place targeting innocent protesters in Washington DC on May 16, 2017.

While we applaud the strong message issued by our country’s legislature, the ARWC continues to maintain our call to the executive branch of our government, as set forth in our earlier statement entitled “…Weakness is not an option with Turkey,” dated May 25, 2017.

To reiterate, our country’s executive branch too must speak, and it must speak out forcefully and in unison with the legislative branch. It must unequivocally declare that our government will not stand idly by when agents of a foreign government at the direction of their leader — as done by Erdogan of Turkey — answer a tyrant’s call for violence of barbaric proportions to be inflicted on US citizens while they exercise their constitutional rights.

The executive branch must mete out commensurate consequences against these thuggish Turkish security personnel who heeded their bellicose president’s orders and, in so doing, they had the unbridled audacity to attack the Capitol’s law enforcement officers. All this while our peace officers were engaged in fulfillment of their sworn duties — to protect and serve our fellow citizens and their rights of “peaceful assembly” and “freedom of expression” guaranteed under our Constitution. All this on American soil, no less!

The executive branch must heed the example of the USHR, and, starting with the White House and on to the Department of State and beyond take swift action to condemn and to penalize the actors who participated in the carnage. It must exact equitable justice against the so-called Turkish republic’s authoritarian head of state and the 21st century’s aspiring sultan Erdogan for the vile disrespect shown by him and at his direction against our nation and its values, on that infamous afternoon of May 16, 2017.