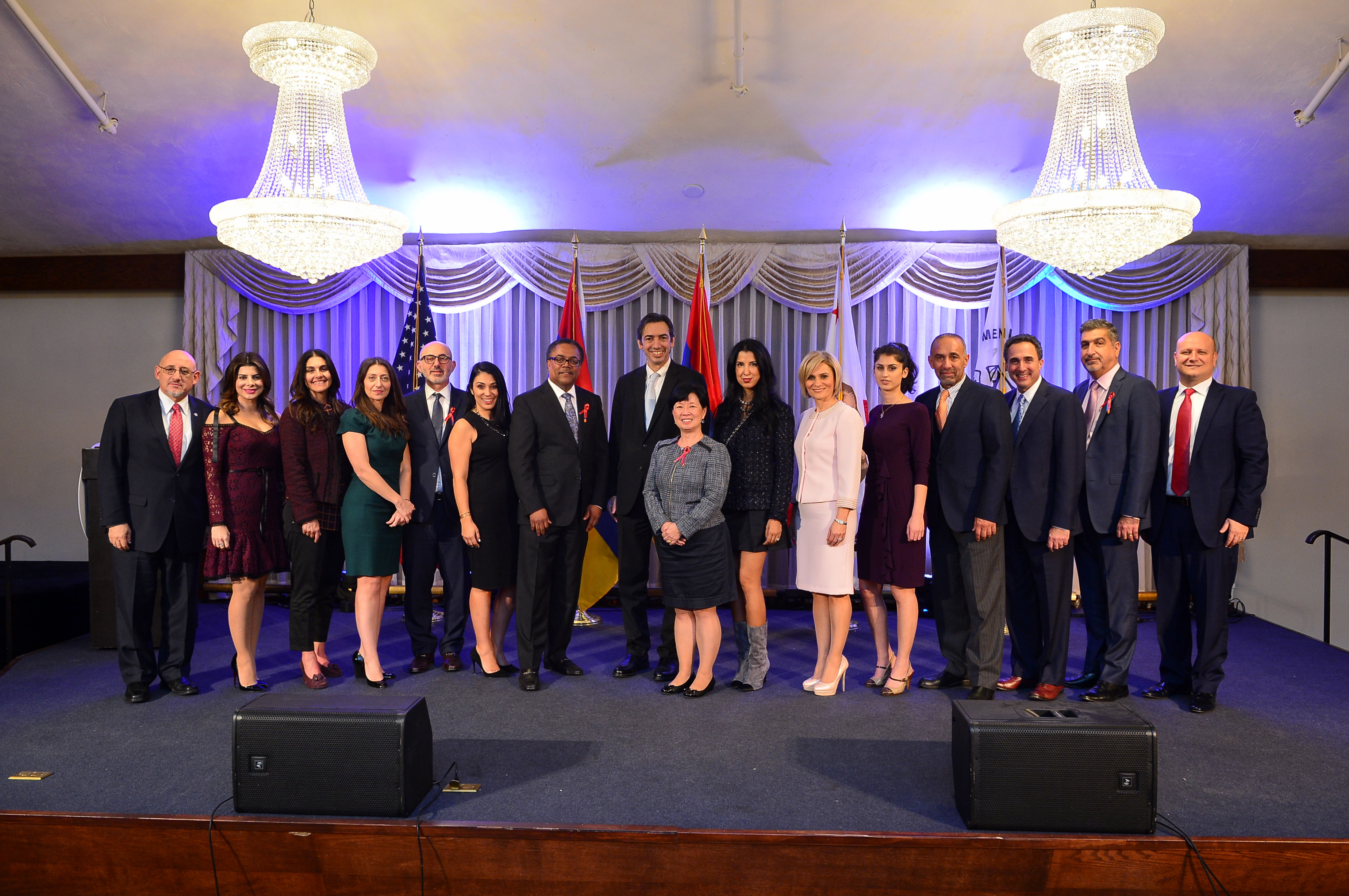 December 5, 2017 Press Releases
On November 16, 2017, members and friends of the Armenian Bar Association gathered at the landmark Glen Arden Club in Glendale, California to celebrate and honor the best of California’s judiciary during the Annual Judges’ Night Dinner.  Nearly 50 judges of the state and federal court systems turned out to rejoice as three prominent jurists of the Los Angeles Superior Court were honored—Judges Victor Chavez, Holly Fujie and Huey Cotton. The Annual Judges’ Night has fast become the Association’s signature celebration, drawing hundreds of attendees from all walks of the legal profession in the most convivial and interactive of atmospheres.  The Association honors those jurists who have distinguished themselves beyond the laudable lines of high intellect, efficiency and consistency.  The Armenian Bar singles out for distinction those who have opened broadly the public’s access to justice, advanced the precepts of the rule of law, incorporated compassion into the fabric of their characters, and guided others in profession and in life. “We are fortunate to have so many distinguished members of the California judiciary join us this evening.  We thank them for their devoted public service,” said Mistress of Ceremonies, Vanna Kitsinian, member of the Executive Board of Governors of the Armenian Bar Association. The evening began with a high-octane reception where guests networked and socialized before advancing into the grand ballroom for dinner and presentation of the awards. There, solo artist Toukhman Khachatourian began the program with a stirring rendition of the national anthems of the United States of America and Armenia. Next, Archbishop Moushegh Mardirossian, Prelate of the Western Prelacy of the Armenian Apostolic Church of America, delivered an inspiring invocation and asked for the Lord’s  blessings to confer on the judges the strength and wisdom to carry on their good work.  The Archbishop’s invocation was followed by a dinner of delicious Armenian cuisine. Chairman of the Board, Saro Kerkonian, assumed the podium amidst great fanfare and thanked the honorary guests and their fellow judges for their outstanding contributions in furtherance of the independence of the judicial branch of government. Mr.  Kerkonian paid eloquent homage to the judges’ professional examples of instilling in the public the trust that California’s courts are bastions where the rule of law reigns supreme.  With flags of country, state and organization adorning the stage in the background, he offered reflections into the work of the Association as it relates to the United States, Armenia, the Artsakh Republic and the State of California. Board member and Association Treasurer Gerard Kassabian introduced the first honoree, Judge Victor Chavez.  Mr. Kassabian greeted the guests with a “hello and welcome” in ten different languages and spoke of the 30-year career of Judge Chavez on the bench.  In a moving tribute, Mr. Kassabian endearingly Armenianized Judge Chavez’s name by adding an “ian” to the end and presented him with a beautiful photograph of the honoree, daughter California Appellate Justice Victoria Chavez and Governor George Deukmejian, on the occasion of Judge Chavez’s swearing-in to the bench by his daughter.  Judge Chavez fondly recalled as a child how his mother read to him the famed book by Franz Werfel, The Forty Days of Musa Dagh, recalling the heroic self-defense of the Armenians during the Armenian Genocide.  He explained how the book left a lasting impression on his life. The next honoree was former California State Bar President, Judge Holly Fujie.  Judge Fujie was introduced by Los Angeles Deputy District Attorney Amy Ashvanian.  Ms. Ashvanian shared with the audience the tremendous career Judge Fujie has had and the countless bar activities she has initiated and led.  Judge Fujie congratulated the Armenian Bar Association on its work in the field of mentorship and judicial evaluations.  She urged collaboration between the Armenian Bar and the California State Bar with respect to their respective mentorship programs. The third honoree of the evening was Supervising Judge of the Los Angeles Superior Court, Northwest District, Judge Huey Cotton.  He was introduced by noted criminal defense attorney and member of the Armenian Bar’s Judicial Evaluations Committee, Alexandra Kazarian.  Ms. Kazarian praised the evening’s final honoree for his leadership on the bench, his activism and his compassion for litigants and young and learning lawyers.  Judge Cotton passionately told inspiring stories of Armenians in his life and courtroom. Judges Chavez, Fujie and Cotton were each presented with a beautiful work of classical art prepared by renowned artist Seroon Yeretsian, each with an original inscription of praise and honor.  The program concluded with a moving benediction by Reverend Father Vazken Movsesian of the Western Diocese of the Armenian Church of America. Following the official program, many stayed on and maintained the high-energy levels that lasted throughout the night.  Valerie Dean, co-chair of the Diversity and Inclusion Committee of the San Fernando Valley Bar Association, called the evening “One of the best, diverse, Judges’ Nights I have ever been to.” “We are thrilled we could once again showcase the great talent, intellect and diversity that is the strength of the California Judicial System at our annual Judges’ Night,” said the the Association’s Judicial Evaluations Committee Co-Chair Lucy Varpetian.  “We look forward to continuing this tradition for years to come,” said Garo Ghazarian, organizing committee chair and former two-term chairman of the Armenian Bar Association.

ARMENIAN BAR ASSOCIATION STATEMENT ON THE ...