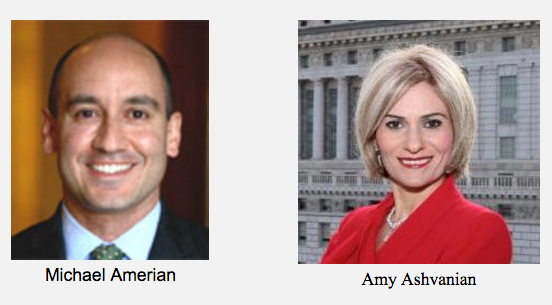 February 28, 2018 Press Releases
The Armenian Bar Association is pleased to announce that two of its stalwart members-Michael Amerian and Amy Ashvanian– have been appointed as judges to the California Superior Court in Los Angeles.  Their appointments were announced on February 27, 2018, in a press release issued from Governor Brown’s office, which included Michael’s and Amy’s biographies below:
Michael R. Amerian, 43, of Los Angeles, served as a deputy city attorney in the Los Angeles City Attorney’s Office since 2003. He served as a law clerk for the Honorable Dickran M. Tevrizian, Jr. at the U.S. District Court, Central District of California, from 1999 to 2000. Amerian earned a Juris Doctor degree from the University of Southern California School of Law and a Bachelor of Science degree from Georgetown University School of Foreign Service. He fills the vacancy created by the retirement of Judge R. Carlton Seaver.
Armenui A. Ashvanian, 46, of Glendale, has been appointed to a judgeship in the Los Angeles County Superior Court. Ashvanian has served as a deputy district attorney at the Los Angeles County District Attorney’s Office since 2005 and has been an adjunct assistant professor at the Glendale University College of Law since 2014. She was an associate at Yeghiayan and Associates from 2004 to 2005. Ashvanian earned a Juris Doctor degree from the Glendale University College of Law and an Associate of Science degree from Glendale Community College. She fills the vacancy created by the retirement of Judge George Genesta.
In 2017, the Armenian Bar Association assembled a team of accomplished and highly-reputed trial attorneys from across California to serve as members of the organization’s Judicial Evaluation Committee (JEC).  Newly-appointed Amy Ashvanian was the first applicant to matriculate through the Armenian Bar’s JEC. The committee’s mission is to evaluate applicants and potential appointees to the California judicial bench and to make recommendations to the Governor and the Appointments Secretary for those candidates who are deemed to be well-qualified. The organizing body recognized that to have an effective voice in the judicial appointment process, it would be necessary that the recommendations be made by those with proven talent and relevant experience as trial attorneys.
You can learn more about the JEC here.
Tags: ArmenBar Los Angeles Superior Court