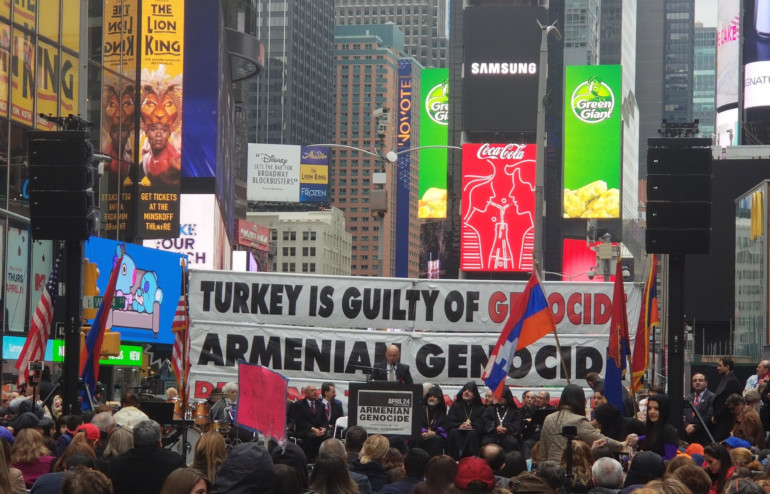 NEW YORK – Not even the hovering grey clouds could dampen the spirit of the thousands gathered for the Armenian Genocide Commemoration in Times Square on Sunday, April 28, 2019, as the 104th anniversary of the massacres was memorialized in a monumental event sponsored by the Knights and Daughters of Vartan.

Relentless calls for recognition were made throughout the afternoon as speakers, guests and the general public paid homage to the holy martyrs of the Armenian Genocide. Over a century later, the vigor of the Armenian people was on full display as the program culminated in a symbolic shoorch bar inspired by the powerful singing of Elie Berberian as he performed the popular patriotic song “Kedashen” amid the backdrop of the city’s skyscrapers and the buzzing motion of Times Square, one of the busiest and iconic districts in the world.

While Armenian songs, dances and voices echoed throughout New York and into the world, top U.S. elected officials stood their ground in their unwavering support of Armenian Genocide recognition. Senate Minority Leader Chuck Schumer (D-N.Y.), who appears at the commemoration year after year without fail, conveyed his fondness for the “wonderful and compassionate Armenian people” and appreciated their presence in the country, stating that “the more Armenians we have in America, the better America will be.”

Following a moment of silence for the victims of the 1915 Armenian Genocide and their descendants, the senior senator urged the public to “call out evil.”

“A genocide that is not properly defined and remembered will certainly lead to another,” said Senator Schumer, who touched upon the Holocaust that succeeded the Armenian Genocide. “We have a moral obligation to always remember one of the most evil undertakings in the history of mankind, and that is the horrible Medz Yeghern.”

END_OF_DOCUMENT_TOKEN_TO_BE_REPLACED

Turning to legislation in the United States, Senator Schumer expressed his disappointment that the leaders in the White House, both Republicans and Democrats, have not stepped up to officially acknowledge the Armenian Genocide. He said he refuses to accept the excuse of politics and emphasized that in the face of denial, people should “stand together and remember the genocide, the 1.5 million victims and what the Armenians went through.”

He made the salient point that the Turkish government did not succeed in its plans to exterminate the Armenian people, noting that now 1.5 million people of Armenian ancestry live in America.

“The Armenian nation has not just endured but it has prevailed,” said Senator Schumer, who is a co-sponsor of Senate Resolution 150 that calls for the U.S. to commemorate the Armenian Genocide through official recognition and remembrance. “The three pashas are gone, the Ottoman Empire is gone, but the Armenian people live on and continue to inspire the world.”

A tireless advocate for the Armenians, senior Senator Robert Menendez (D-N.J.), who earlier this month admonished U.S. Ambassador to Turkey nominee David Satterfield for failing to refer to the 1915 atrocities as Genocide, stated that everyone has “come together in remembrance, in reflection and in solidarity.”

The Ranking Member of the Senate Foreign Relations Committee, who along with Senator Ted Cruz (R-T.X.) recently sponsored Senate Resolution 150, is ensuring that the foreign policy of the U.S. “reflects appropriate understanding and sensitivity concerning the Armenian Genocide.”

Countering the denialist history, Senator Menendez stated that the Turkish authorities began a systematic campaign to exterminate the Armenian population through “killings, starvation, forced deportation and untold brutality” and remarked that “such intentional horrific violence targeted towards one people has a name and one name only and that name is genocide.”

He acknowledged the 1.5 million victims who perished and also appreciated their contributions to the Armenian history and culture that “lives on today and there can be no denying them.”

Taking a stand “in support of the unshakable truth,” Senator Menendez outlined how the Turkish government has spent “countless millions of dollars on lobbyists willing to trumpet lies and make excuses for the atrocities that its predecessors committed.”

“Portraying the extermination of 1.5 million Armenians as nothing more than a consequence of World War I is a distortion of history at best and at worst a contrived excuse for an unthinkable crime against humanity,” he continued.

He spoke of the suppressive Turkish government that has “undermined the fundamental right of freedom of speech” and how the country’s leaders have initiated prosecutions, smear campaigns and even resorted to violence against historians and journalists who have studied the Turkish treatment of the Armenian community, remarking that “such actions are reprehensible and speak volumes both about the crime and the cover up.”

Recalling the words of Ambassador Henry Morgenthau, U.S. Ambassador to the Ottoman Empire during the Armenian Genocide, who described the Turkish authorities of deporting Armenians as a ‘death warrant’ to a whole race, Senator Menendez asserted that today’s diplomats should “not be any less frank when engaging with the Turkish government.”

“We refuse to see the truth suppressed, the facts denied and history revised,” said Senator Menendez. “We will not rest until it becomes the official policy of the U.S. government to recognize the Armenian Genocide here and any place else in the world.”

Congressional Armenian Caucus Co-Chair Frank Pallone (D-N.J.), pledged that he will continue to push for recognition of the Armenian Genocide and reaffirmed that there has been “tremendous progress” around the world as 30 countries now officially recognize the Armenian Genocide, along with 49 out of 50 U.S. states.

“We will continue our efforts and demand that the Turkish government recognize the Armenian Genocide and pay reparations,” said Congressman Pallone, who also called for ongoing support of the Republic of Armenia as well as Artsakh. A longtime supporter, he has made trips to both Armenia and Artsakh, where he has advocated for the people’s right to self-determination.

He urged the public to persist in their fight and hold rallies such as the annual commemoration in Times Square in order to achieve official recognition.

“Please understand how important it is for you to be here today and how important it is for all of you to continue to support your Armenian advocates and Armenian organizations like the Knights and Daughters of Vartan because without your help, we wouldn’t be able to make progress on the issues you care so much about,” concluded Congressman Pallone.

New York Congresswoman Carolyn Maloney (D-N.Y.), a member of the Congressional Caucus on Armenian Issues, remarked that the U.S. should “join the chorus of voices across the globe” and recognize the genocide and the calculating elimination of an entire population.

“We mourn the 1.5 million Armenians murdered by the government that was supposed to protect them,” said Congresswoman Maloney. “We must honor their memory and we must come to the day that Turkey’s President Erdogan recognizes the genocide instead of denying it.”

She said she is proud to support resolutions that recognize the “systematic plan to extinguish the ancient, dignified and accomplished Armenian people” and the lessons that must be learned in order to prevent future tragedies from occurring again.

“We must teach ourselves and our children the abuse of state power that allows these crimes to go unpunished,” said Congresswoman Maloney. “On this solemn day of remembrance our  message remains united and clear: the U.S. and Turkish governments must formally acknowledge the terrible genocide that occured 104 years and I am with you as we keep fighting and pushing for recognition.”

Headlining the event with a special cultural performance was Elie Berberyan, who curated an artistic concert that included a rendition of “Ils Sont Tombes” (They Fell), by Charles Aznavour, the poetry of the Hovhannes Shiraz set to music “Intz Guh Moranam” (I Forget Myself) and “Dle Yaman” by Komitas.

“Even though many years have passed since the Armenian Genocide, it does not stop me from remembering it and instead it gives me more drive,” said Berberian. “We are paying tribute to the ultimate cause that concerns every Armenian in his or her heart.”

Grand Commander and Matron of the Knights and Daughters of Vartan, Dr. Gary Zamanigian and Diana Tookmanian, respectively, elaborated on the significance of commemorating the Armenian Genocide. The Knights and Daughters of Vartan have sponsored the Times Square Armenian Genocide Commemoration since 1985. This year the event was co-chaired by Tigran Sahakyan and Ari Minnetyan, under the guidance of Chairman Emeritus Hirant Gulian.

Armen McOmber, Esq. and Professor Nvair Beylerian compellingly led the program. McOmber was recognized for his decade of service to the Times Square Armenian Genocide Commemoration and was presented with a special certificate of recognition and a Knights of Vartan medal.

The results of the 2019 Knights and Daughters of Vartan International Armenian Genocide Essay Contest were announced: first-place, Andrew Panosian of La Crescenta, California, who is a freshman at Glendale Community College; second-place, Garine Kamajian of Indian Shores, Florida, who is a junior at University of South Florida-Tampa; third-place Lilit Arsenyan of Yerevan, Armenia, who is a freshman at Yerevan Brusov State University of Languages and Social Sciences. This year’s question of how creative expression—literature, music, cinema, visual arts—has enhanced the students’ personal understanding of the Armenian Genocide, delivered thought-provoking responses from applicants who live around the world.

The opening remarks and prayer were made by Zaven Khanjian, Executive Director of the AMAA. The invocation and closing prayers were made by Archbishop Anoushavan Tanielian, Primate of the Eastern Prelacy of the Armenian Apostolic Church of America, Very Rev. representing the Very Rev. Fr. Daniel Findikyan, Primate of the Eastern Diocese of the Armenian Church of America, respectively. Other clergy in attendance included Nurhan Becidiyan, of the Roman Catholic Armenian Eparchy of America and Canada.

Founded in 1985 by the late Sam Azadian, a former Brooklyn, New York resident, who lost four siblings during the Armenian Genocide, the Armenian Genocide Commemoration at Times Square has honored the 1.5+ million Armenian lives lost during the horrific events of the 1915 Genocide of the Armenians by the Young Turk Government of the Ottoman Empire. This internationally-recognized annual event draws thousands of Armenians and non-Armenian participants to commemorate the solemn occasion. The event features speeches and tributes delivered by prominent political figures and civic leaders, officials of the Knights and Daughters of Vartan, representatives of major Armenian-American organizations, and distinguished scholars and educators as well as high-ranking Armenian and non-Armenian clergy.