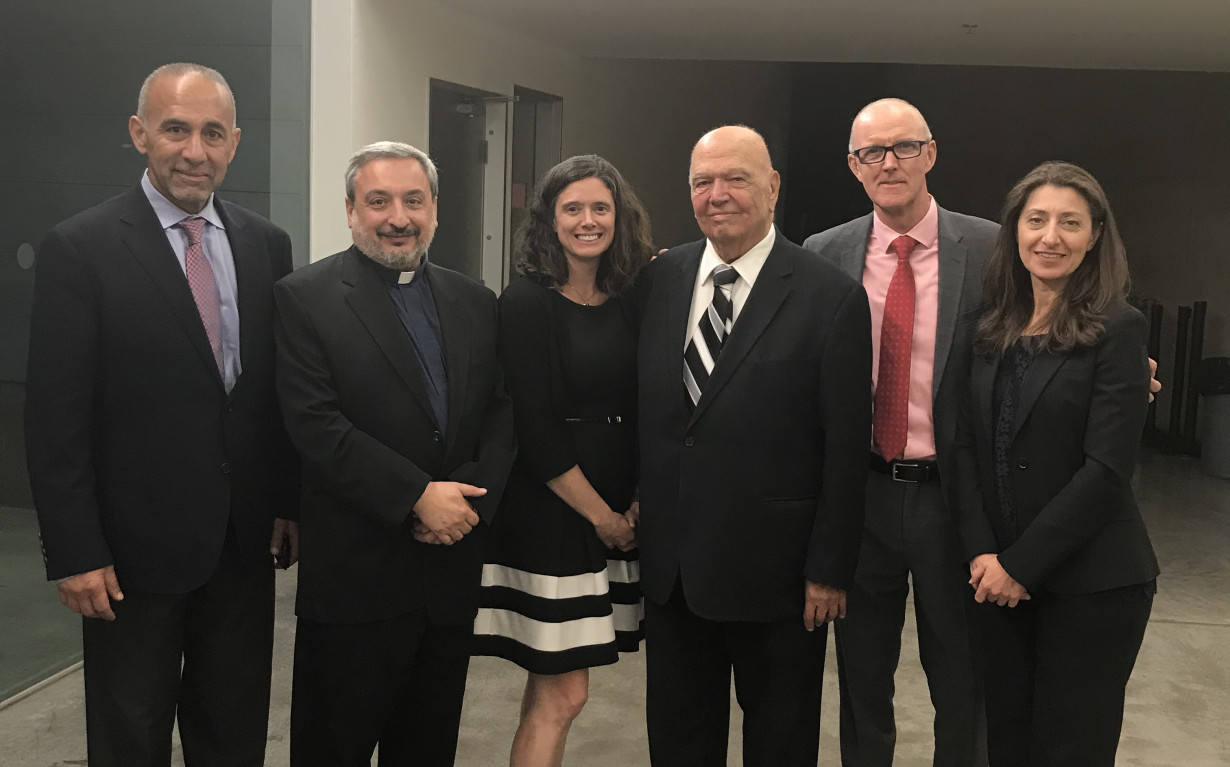 May 15, 2019 Press Releases
A special partnership between the Armenian Bar Association and BASIS.ed to develop Armenian Genocide-related educational studies in Arizona’s public schools climbed to new heights on April 29, 2019.  With the 104th anniversary of the Genocide fresh in mind, approximately 50 social science teachers from the highest-ranked network of public charter schools in America gathered together to hear a unique and constructive message of how to incorporate lessons about the Genocide into their students’ broader understanding of world history. The teacher-training program was held at the BASIS flagship campus in Phoenix and was masterfully led by pioneer educator Professor Richard G. Hovannisian.   With deeply personal reflections about his own all-American upbringing in the San Joaquin Valley during the Great Depression – when the stories of the Armenian people’s terrible trauma went largely untold – Professor Hovannisian explained to the teachers that there are certain basic and broad themes of instruction into which the Armenian Genocide may comfortably be accommodated. For example, whether drawing from his childhood memories about the isolation of his ethnic identity or tying together the demonization and dehumanization of various victim groups by their oppressors, Hovannisian made a compelling case of how much more alike, rather than dissimilar, the Armenian experience is to other crimes against humanity and recurring episodes of prejudice.   With nodding heads and knowing eyes, the BASIS teachers and administrators absorbed his advice with appreciation and expressed their poise to take back to their classes the lessons they had learned. Richard Hovannisian highlighted his presentation with attention-grabbing video clips of Genocide survivors which brought the immediacy of the subject matter into clear focus for the BASIS teachers.  Nearly 50 years ago, Hovannisian initiated a ground-breaking oral history project aimed at capturing survivor testimonies and his collection of more than 1,000 accounts are now housed at U.S.C.’s  Shoah Foundation where they are being digitized and studied, both in the context of Armenians’ unique experiences and also through the wider lens of shared experiences with other groups. In a lively question-and-answer session which followed the program, the BASIS educators probed with interest and departed with an understanding of how to welcome the Armenian Genocide into the learning lives of their students.  Thanks to Professor Hovannisian, every question was met with an uncomplicated and relatable answer. Professor Hovannisian is widely known for his legacy of institutionalizing Armenian history and genocide scholarship at U.C.L.A.   He has lectured in nearly 40 countries, more than 150 colleges and universities, and more than 1000 public lectures and forums on six continents. Hovannisian has served as a consultant to the California State Board of Education, authoring the chapter on the Armenian Genocide in the State’s Social Studies Model Curriculum on Human Rights and Genocide. He has also served as a consultant to the Facing History and Ourselves Organization, assisted in the preparation of its resource book on the Armenian Genocide, and introduced the subject in numerous teacher-training institutes and summer workshops. “We often struggle with how best to teach our children about one of the darkest pages of our people’s history and its long-lasting consequences of trans-generational trauma and resilience,” said Lucy Varpetian, Co-Vice Chair of the Armenian Bar Association.  “The survivors themselves may have been hesitant to share openly their stories as a guard against passing on the heavy burden of their Genocide memories.  It’s important to forge these relationships with educational institutions like BASIS so that we can learn to impart information about the Genocide to our children in more inclusive and universal ways.” For four years, the Armenian Bar and BASIS have worked together to open and broaden the avenues of Armenian Genocide instruction in many Arizona high schools and middle schools.  Following the teachers’ workshop, a second Genocide commemoration program took place, drawing a more diverse audience of student families and members of the local Armenian community including Father Zacharia Saribekyan of Scottsdale’s St. Apkar Armenian Church, of Scottsdale’s St. Apkar Armenian Church.
Tags: Armenian Genocide BASIS.ed Richard Hovannisian Shoah Foundation

SEVEN DAYS OF THE SPIRIT ARMENIA ...